So, I have a feeling that Wedensday and Monday nights will be my updating nights. Unless I get lazy and don't feel like it. (Go me!)

So, since I am hacking my way through edits of my own, I figured we could talk about revisions. Not too bad, right? It's not that scary, right?

Truthfully, I hate revisions. My favourite part is the writing, I can't stand going back and actually looking at what I wrote and try to figure out how I can pull a story out of the bloody mess of words. Now, the trouble with talking about revision is that there is no good way to go about it. Everyone has their own style, and that's just what works for them.

Well, today, I'm going to talk about what I do. Because, dontcha now, it's all about me.

So how do we take that massive pile of paper and hack away at it? Well, there are two ways you can do it.

a) Wait until the story is done before you start looking at it.
b) Edit as you go.

A lot of writers will suggest option a. But I know some who are quite successful a toption b. The reason that writers don't suggest this is because often new writers get so caught up in the editing and they become too-self conscious of their work, so they end up tangling themself up in words, getting frustrated, and quit.

I do option a, but that's because of my lame excuse for 'creativity.'

So, the manuscript is written. We'll talk about my current manuscript titled In The Eye of Death. (or TED, for short. Hi TED!)

Now, what we did with TED, (and by 'we', I mean me and the multitude of voices in my head) is we wrote it all out first. This took three weeks and many ten-hour days staring at a computer screen. The final product came out to a whooping 57 000 words. Not my finest hour, but it will do.

STEP ONE! (Besides the actual writing part)

What I like to do is print of my manuscript, page by agonizing page (why yes, I do spend a thousand dollars on ink a year. Why do you ask?) Then I will go through and with a literal red pen, I will focus on flow, information that's needed, and any major unanswered questions or plot points. I go through it all manually, and once that's finished, I take my stack of paper (which not looks like the dog tore it up) and apply these changed onto my electronic copy.

This usually takes about a weekend in all. I'll sit down and spend about 24 hours (in two 12 hour chuncks) going through and making sure all the changes are added.

It now looks a bit less like a pile of random words, and now more like a lumpy roll of cheese.

This is where I print it all off again. (Oh shut up all you enviornmentalists. I recycle.) I go through, looking for new continuity errors that have popped up with all the scenes I've added. TED, by this point, is not at 67 000 words. Go TED!

So again, I read through all of it with my red pen, hacking up characters and motivations and anything that just makes my ears turn purple. Then I go and add the changes. This usually takes less than the first time, because there's less to add.

I don't print anything off this time. Happy, you damn Green People?

I go through my book AGAIN (why yes, by this time I do want to pound my head into the keyboard.) and I check for spelling mistakes, typos, nasty wordings or lack of description. I 'pretty' up my writing. This is done over the span of several days, because I can't look at a computer screen for that long and by this point I'm sick of all the paper.

This is where my manuscript is now. It's off to the betas! Every couple of weeks or so (or when I prode them with a sharp, hot stick) they send me chapters to look over. This is just a lot of adding, changing around, messing with characters and plot. I can usually take care of bad writing on my own, so my betas don`t look at those things. (Although sometimes they point out glaringly embarrassing typos.) Right now, from the edits my betas have sent me, I'm up to 76 000 words. (As you can see, I underwrite.)

This is also where I do things like, write my query letter, work on other books, mess around on Absolute Write and stare at the ceiling. I'm a bit of a control freak, so this step in the process ALWAYS drives me crazy. I like things done on my time.

This is where, once all my betas comments have been taken into account, I go bac and do one final read through, to catch any nastiness that I might have missed. TED isn't here yet, but soon, my precious.... soon.

And then, it's off to the agents!

Hopefully TED will be on sub by June. Cross your fingers for me!

Now, just for fun, I found this "word cloud" thing on wordle.net which I thought was really cool. I figured I'd pump TED in there and see what we get. 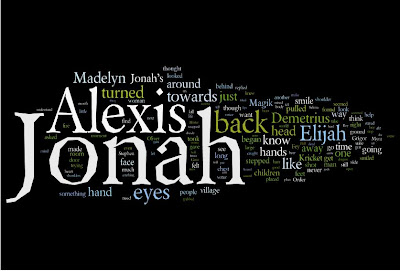 I Wanna Hear Yours: Why Are We Underestimated?

Hey guys, I know I haven't ben around much recently. Things have been crazy, and I jut haven't been able to come up with anything half-decent to write about. But thankfully, I have a boring lovely receptionist job now, in which I can devote much of my free time to writing, and pondering the madness of it all.

And speaking, of madness, how about some crazy queriers? Like Janet Reid's 3D Query , Or how about some good ol' fashion weirdies? But wait! There's more!

Why do these querying blunders keep happening? Are people trying to piss off agents? Are they really that stupid? Were they possessed by aliens and forced to do these things to ruin their careers?

Honestly, I know many of you believe in option b, (and a few of you might vote for option c) but I have a different theory.

These blunders keep happening because the publishing industry is underestimated.

Even the most intelligent of us think that publishing can't be that hard. I mean, honestly, when I first started I was afraid it was going to be too easy. I thought there was no way people wouldn't love my book as much as I did. A year and one hundred rejections later, I've wised up.

Of course, I didn't start querying like mad because I thought I was better than everyone else. I did my research, learned I wasn't such hot stuff, and got in line with the rest of the aspiring writers.

But many people on a daily basis underestimate us, don't do their homework, and think they're going to succeed. Because of this, we see wackos who think they're going above and beyound, but are really just scaring the pants off agents. I met a writer not long ago, good guy, smart guy. He finished his manuscript and decided to shop it around. After a while, he was getting angry because he wasn't selling anything. After a while he went out to golf with a friend of his who was an editor at a publishing house. He brought his manuscript, asked the guy to look it over.

Our little editor friend turned to him and said, "What would you say if I came onto this golf course, without ever having played a game, and said I was better than you and could beat you in a game?"

And that's when my friend learned its not as easy as it looks.

But I'm not here to talk about occasions in which we're underestimated. I came here to ask why.

What about writers, editors, publishers, book sellers-- what about the whole damn process makes people think its easy?

Is it because writing is an art form? Do people think it's this easy to paint and sell a painting?

Or it is because... it's just writing. Anyone who speaks English (or any other language, for that matter) can write a story. They just need to think up a good plot, some characters, and make it to THE END. However, it's a different story (ha! Pun.) when it comes to writing a GOOD story. And many first-time authors haven't learned to distance themselves from their pieces (hey, another thing I could blog about) and really scrutinize. Many people forget to mention that part of writing a novel.

I, myself, write young adult fiction. I've come under scrutiny many times because writing children's fiction is sometimes seen as a "lesser" form of writing. Often people see it as easier too. But, of course, no writing is any lesser than any other. So, will people look at children's fiction as an easy gateway into the publishing world? Is this another example of how our society looks on its younger citizens has "inferior"?

You've heard my ramblings, now I wanna hear yours. Why do people underestimate authors, YA, and publishing?