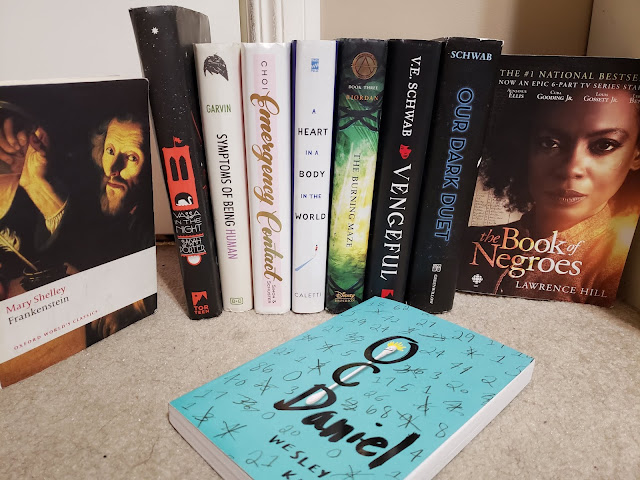 Another year has gone past and another stack of books has been read. Every year I like to look back on the books I've read and the reviews I've written to see if feelings have changed, which books have staying power, and pick out my favourites and not-so-favourites. 2018 has not been my greatest reading year, but I fared better than previous years by getting to 17 books out of my goal of 25. I've had this goal for the past few years, which if you've been reading my blog you'll know I have yet to actually reach. I did better than in 2017 where I read 15 books, though just shy of 2016 where I read 19 books. And finally there was 2015, where I only got through 14 books. As always, I'm setting my goal for 25 again next year, and 2019 is going to be THE YEAR. YOU HEAR ME, UNIVERSE? I'M SERIOUSLY SERIOUS THIS TIME. 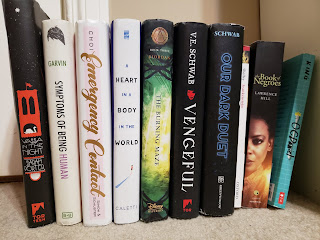 2018 saw a lot more contemporary novels about mental illness and gender identity. 10/17 of the books I read this year were review requests, either from publicists, publishers, or authors themselves. I tried to focus a little more on the books I picked out rather than requests, though obviously I was still leaning into the requests. My reading in 2019 will be more focused on fantasy and sci-fi, and I'm itching for books that feature diverse casts. But before we can focus on the future, let's take a look back at what really rocked or flopped this year.

Fabulously Freaky
Vassa in the Night by Sarah Porter

I love, love, love this book! Though it was the first book I read in 2018, it has stuck out the hardest, mostly because of how creatively fantastical the story is. It's urban fantasy, so we're still set in the familiar, while being introduced to this wonderful world of magic that's based in Russian folklore and adapted to the modern age. The result feels original when held up against the usual werewolves, vampires, and demons of urban fantasy. I also love how surreal the story feels too; night is personified and has been kidnapped, and reality warps and changes in Babs Yagg's bedroom. It's a story of metaphors interwoven in metaphors like petals interlocking to form a rose. I love how this book pushed at the limits of the fantasy genre and brought fresh blood into a genre that tends to reheat the same story like never-ending leftovers. A lot of people seem to be put off by just how truly weird this book is, which makes me a little sad at times, but it's also understandable because this book is weird, the weirdest of weird, which is what makes it so good.

When I first started doing these Reviews in Review in 2015, I included Vicious on the list, the predecessor to this book, because I was blown away by it. It is still one of my all-time favourite books. I was so thrilled that there would be a sequel; I even got in on the pre-order campaign and swag contests. Then this book finally arrived in my mail and... it was not the book I asked for. I thought I was getting a sequel to Vicious, but in fact, Vengeful was more of a spin off, like hoping to get more seasons of "Friends" but instead ending up with "Joey," except 'Joey' is actually some rando character we've never met before who won't shut up about how amazing they are. I got to see some 'cameo' appearances of Victor (that's sure what it felt like) but it wasn't a sequel in the way I wanted it to be. I waited years for this book only to be given SOMEBODY ELSE'S STORY. I'm still angry about this and it's been a couple months since I've read it, so I have a feeling I'll be angry for a while. It's the ones you love that hurt you the most. And while I do love Schwab, this one hurt more than others.

Powerful Poignance
What I Leave Behind by Allison McGhee

What an incredibly beautiful book. I still find myself thinking about this book because of how much it nailed those emotional notes. The book is written in 100 chapters of 100 words long, and so every word has a very purposeful intent to it. The author gets across so much in so little time that it almost felt like the spaces between the words-- what wasn't being said instead of what was-- made the book feel so heavy. I think too I could really relate to Will's feelings of powerlessness in the face of tragedy, and the hope that comes when he starts to gain some control and autonomy over his life again. I just seriously want to hug this book all day long. It finds beauty and meaning in the details of living and uses it in impressive ways.

Some books you read and wonder why the author ever decided to write for children. Full Fusion was definitely one of those books. At first, it appears to be like every other uncreative YA trope factory -- boring and flat characters, simple plots, ultimately a lack of tension outside of the romance, and filled with cliches-- but this book took it one step further by incorporating horrible messages throughout. There was a slew of anti-feminist and anti-woman messaging that seemed dangerous in a book aimed towards young girls. It also included the main character cheating on her boyfriend and then instantly being forgiven, and it was implied that cheating was okay since the MC and her love interest were "really in love" and "meant to be" etc, etc, cue barfing everywhere. If you're going to have a predictable piece of garbage, at least don't fill it full of toxic messages aimed at the vulnerable readers that make up your audience! This is one of those books that if I saw a kid reading it, I'd snatch it out of their hands and replace it with a GOOD angel romance story, like Unearthly. Ain't nobody got time for anti-feminist rhetoric.

Set the Scene
The Book of Negroes by Lawrence Hill

Historical novels can be difficult as there are so many facets of life that have changed over the years humans been around. It's easy to miss details or provide inaccurate ones, so historical fiction has always intimidated me. I'm impressed by the writers who can do it well and are able to transport readers across time. The Book of Negroes is one of those books that firmly plants you back into the 19th century and gives you a real sense for how people lived in worlds lost to us through time. Even a couple months later I'm really captivated by the settings and world-building that the author was able to get across. Little scenes like Aminata's wedding where they "jumped the broom" stood out as sweet and yet historically accurate, and allows the reader to see what living actually looked like in these environments. I wish I could bottle up this historical world-building, cause that shit is like fine wine.

And there you have it! Another year of bad-ass books and overly long reviews to go with them. I hope you'll hang out for this year's round of reviews and discover which ones will be the stand outs for 2019.

Labels: full fusion, reviews in review, the book of negroes, vassa in the night, Vengeful, what i leave behind
Newer Posts Older Posts Home
Subscribe to: Posts (Atom)