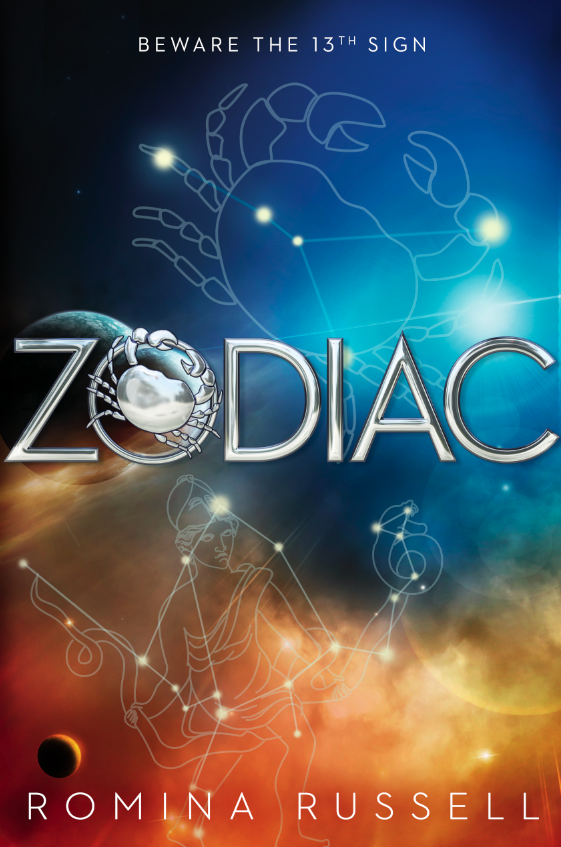 Goodreads Description: Rhoma Grace is a 16-year-old student from House Cancer with an unusual way of reading the stars. While her classmates use measurements to make accurate astrological predictions, Rho can’t solve for ‘x’ to save her life—so instead, she looks up at the night sky and makes up stories.

When a violent blast strikes the moons of Cancer, sending its ocean planet off-kilter and killing thousands of citizens—including its beloved Guardian—Rho is more surprised than anyone when she is named the House’s new leader. But, a true Cancerian who loves her home fiercely and will protect her people no matter what, Rho accepts.

Then, when more Houses fall victim to freak weather catastrophes, Rho starts seeing a pattern in the stars. She suspects Ophiuchus—the exiled 13th Guardian of Zodiac legend—has returned to exact his revenge across the Galaxy. Now Rho—along with Hysan Dax, a young envoy from House Libra, and Mathias, her guide and a member of her Royal Guard—must travel through the Zodiac to warn the other Guardians.

But who will believe anything this young novice says? Whom can Rho trust in a universe defined by differences? And how can she convince twelve worlds to unite as one Zodiac?

My Review: Warning: Spoilers and swearing ahead!

Confession time: I'm terrible for covers. I will often judge a book by its cover and pretty ones make me go grabby hands. That's why as soon as I saw ZODIAC by Romina Russell I had to grab it. The story looked intriguing, and plus, Space! Who the hell doesn't love sci-fi? You? You're lying.

I was severely disappointed.

The beginning of Zodiac starts off pretty strong. We step into a pretty typical high school experience (save for taking place on one of cancer's moons) and we're introduced to Rho Grace and her friends, all part of a band. The beginning did an excellent job of introducing a lot of necessary information. In fact, all throughout the book, the author really excelled at weaving information into the story so nothing felt terribly bogged down. Through the first several chapters, I realized there was a lot of information being relayed, but it didn't feel heavy or bogged down, which is essential when you're building your own world. To add to that, the beginning really drew me in, especially by the time our initial calamity sets in. When the moons of cancer collided, I could really feel it. The way the author describes the terror and tragedy really hits home, which is especially important, as we don't get enough time to see and get attached to the world before it's destroyed. I didn't know the characters much, as the story starts with the tragedy, but the author managed to get in some real empathy from me, just through the way she described the loss and pain the characters felt. All of this was without feeling too bogged down by "woe is me" which is nice.

Along with being skilled with laying information into the narrative (both plot wise and world building), the author really excels at world building. The system of Psy energy, how the constellations came to be and existed together all felt pretty well put together. It felt solid, and each time the characters landed on a new world was the best part of the book. I'm a sucker for world building and Zodiac had it in spades. However, that is where this book's strengths end.

Let's start with the characters. I'm not normally one who pickets for strong female characters, but Rho pissed me off by how passive and pathetic she was. Throughout the whole book, she does absolutely nothing. It's her idea to warn other signs of the coming danger and what happened on her home world, yet no one believes her or she gets blown off. She has some skills with Psy energy (which she doesn't EVER need to practice, because she's a SUPER SPECIAL SNOWFLAKE.). And she faces Ochus at the end, a battle that ends in a tie because she was able to use her Super Special Powers That She Never Has to Actually Learn to beat him back just enough to survive. The story involves Rho being picked and given power because "It's in the stars" and what's a YA book without a goddamn speshul widdle princess. She then runs around to a bunch of other planets, all in an attempt to show off more of the author's world, to convince people that their version of the boogeyman is real. Meanwhile, despite planets BLOWING UP, all the official adults are too stupid to actually do something about it. Then when she finally convinces them (which she doesn't even do, they're swayed by the fact that SHIT KEEPS BLOWING UP) they all run off to a battle which they have little to no plan for (other than using our Speshul Princess as bait for the baddie), and then get beaten. Big surprise.

I would be a bit more forgiving if Rho actually did small heroic things throughout the book. You don't have to blow up a baddie or save a planet to be a hero. Sometimes our heroes are those who help out children, go out of their way to do something they know is right, or even just speaking up and telling people what they think. There are no small chances for Rho to show off what an "awesome" person she is. (I certainly couldn't figure it out, but every other character wouldn't stop telling her how fabulous she was, so there must have been SOMETHING there.) Even when there is a chance to rescue some people on Virgo, instead the author chooses to have the people they were going to rescue (mind you, this wasn't even Rho's idea) die instead. Just to make her look worse. Well, congrats, mission accomplished. There was nothing about Rho that made me like her, let alone cheer her on as a hero.

The other characters in this are no better. Hysan is probably the most forgiving, but too many parts had me rolling my eyes (especially when he talks about how speshul Rho is despite her NEVER HAVING DONE ANYTHING.) Mathias was eye-roll worthy, and the only thing that made me like him was when he died at the end. Which I don't foresee as sticking, since we don't get to see his corpsey body. Boo.

Ultimately, this book would have been wonderful had it had a completely different plot and characters. There was nothing to sympathize with with the characters, their motivations and actions often seemed stupid and unreasonable (such as Mathias Tasing guards in one of the Houses. You know, that shouldn't get you in trouble or anything.) Plus the plot felt so formulaic that it made me sick. Here's a tragedy. Here's our MC getting chosen. Here they are with their plan to save the day. Here's the two boys that make a love triangle. And then yaaay, the special snowflake saves the day without making any difficult decisions. Everything about this book was wonderfully creative-- except the parts that matter.

TL;DR: 1.5/5 stars. Unless you enjoy the cliched love triangles and a plot you can foresee blindfolded, don't bother.
Posted by K. E. Carson at 3:41 PM No comments: