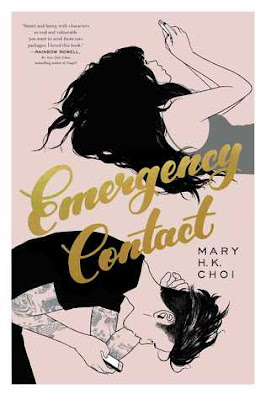 Goodreads Description: For Penny Lee, high school was a total nonevent. Her friends were okay, her grades were fine, and while she somehow managed to land a boyfriend, he doesn’t actually know anything about her. When Penny heads to college in Austin, Texas, to learn how to become a writer, it’s seventy-nine miles and a zillion light years away from everything she can’t wait to leave behind.

Sam’s stuck. Literally, figuratively, emotionally, financially. He works at a café and sleeps there too, on a mattress on the floor of an empty storage room upstairs. He knows that this is the god-awful chapter of his life that will serve as inspiration for when he’s a famous movie director but right this second the seventeen bucks in his checking account and his dying laptop are really testing him.

When Sam and Penny cross paths it’s less meet-cute and more a collision of unbearable awkwardness. Still, they swap numbers and stay in touch—via text—and soon become digitally inseparable, sharing their deepest anxieties and secret dreams without the humiliating weirdness of having to see each other.

My Review: I was given a review copy of this book by the publisher in exchange for an honest review.

Have you ever wondered what it would be like to go on a road trip with someone you really hated? Well good news, because reading Emergency Contact is a lot like being trapped in a small, uncomfortable space with a selfish, spiteful little shrew on an endless drive into hell. There's no pit stops, no rolling down the window, and you bet your bottom she's going to criticize your music choice. The author achieves this effect by introducing us to one awful character after another-- and I don't mean awful as in poorly written, as the characters were all consistent and well-rounded-- just that their personalities were complete trash. Most supporting characters, as well as the love interest, Sam, did have moments where they were compassionate, considerate, or selfless, but Penny continued to be awful right up until the last page.

The book starts off with Penny in the Apple store with her mom, picking out her new phone. Instead of it being a happy moment, Penny is crabby the entire time. She gets bullied by another girl there and decides to take out her anger on her mom later in the car, calling her stupid and getting upset for childish reasons (because mom was talking to someone else at the store? WTF much?). This left a hugely sour taste in my mouth which didn't go away, mostly because Penny continued to be an jerk to everyone around her -- she's rude to her roommates because she intereperates them as rude first (not sure how she came to that conclusion?), she discovers Sam collapsed on the street and decides she can't touch him because he might be a drug addict so she kicks him awake instead, she's incredibly superficial and seems to be mainly interested in how guys look first and personality second, and on and on. If there's a chance for Penny to be mean and spiteful, she takes it, even if it is just to silently judge people. I suppose the author intended for Penny's spiteful internal monologue to resonate with teens somehow-- after all, we've all felt like that crowd of popular girls was a little too fake or that old man smelled really awful-- but instead of using these judgemental moments sparingly, the entire book is one long judgement train, with Penny thinking she's somehow better than everyone else for thinking this way. It's exhausting and makes her seem more cruel than relatable. More so, the relationship between Penny and her mother made me sick to my stomach at times. Penny makes all sorts of claims about her mother-- that she's not responsible, is a 'MILF,' that she's stupid-- while Celeste is shown to be a perfectly normal mom who wants to be involved in her daughter's life. This makes it really hard for the reader to understand Penny's reasoning and agree with her, because the reader doesn't see Celeste behaving the way that Penny describes. So Penny comes off as completely unreasonable-- even a bit abusive sometimes. Even when Celeste ends up in the hospital after eating a pot brownie, the first indication that she's anything like Penny says, it feels like Penny's reactions to the event were unreasonable. Shit happens, but that doesn't mean Celeste is a bad person. I wanted to understand why Penny felt so negatively about her mother, but the reasons given were half-baked at best and glossed over. Because it wasn't clear why she's so mad, Penny just looks like the bad guy in every interaction. I understand the author was trying to illustrate the tumultuous relationship between a teen girl and her mother, but I wish it was handled in a way that didn't demonize teen girls.

The reason why having a book full of unlikeable and unsympathetic characters was so difficult was because this was a ROMANCE BOOK, and a CHARACTER DRIVEN ONE AT THAT. Meaning all the focus, tension, and reason for reading was on these characters. There were plot elements that came into play that were intended to shake up the romance and introduce more tension, yet they were so poorly executed it would have been better if they'd been left out. Penny has a boyfriend back home? Two seconds to talk about it and they're over it. Sam might be having a baby with someone else? Let's just Deus ex Machina that problem away. It got to the point that I ignored any potential conflict because I knew it would get swept away without any consequences or real effect on the story. Because of this, there were no real stakes, no sense of conflict or danger building. In romance, sometimes a lot of the fun comes from setting up these dramatic situations and seeing how your characters resolve them, and I was really disappointed to see these great set-ups with no follow through. The only interesting subplot had to do with Penny's story that she wrote about the "anima." It was a great metaphor for their relationship and some of the themes of the book, but I wish it had been expended upon and filled out more. It also had the same anticlimactic feel that the other subplots did in that it kind of just... went away without ever going anywhere.

Because none of the conflicts led anywhere, the tension in this book was abysmal. There was a bit of romantic tension, but even that was pretty mild compared to other YA romance books. There was no dramatic tension, because the conflicts lacked a satisfying climax. There was no plot tension, because everything else going on was only there to reinforce the romance. Somehow, the author even found a way to make their scenes about writing boring. I'm a writer, and if I'm not enjoying reading about writing, then you as an author have failed spectacularly. A lot of the flaws that I can see come down to the fact that the author is an experienced writer, but obviously not experienced with novel formats. The lack of climactic moments, the unlikeable characters, even the lack of tension and decent pacing could come down the fact that this is Choi's first novel. The funniest part about my issues with the book is that Penny receives the same feedback from her writing professors WITHIN THE ACTUAL BOOK. It's said that Penny's characters were unlikeable, had no motivation, etc, which are complaints that I had about Choi's writing. This proves to me that Choi was aware of the problems with her book and either chose not to fix them or was unable to. The writing style is full of short, blunt sentences that gets straight to the action. There are no flowery sentences or description to be found, but unfortunately, it's hard to appreciate the fact that Choi can write when the rest of the book is in such rough shape.

Finally, my last and probably strongest complaint with this book is the way it touched on diversity, and how it approached major subjects such as racism, rape, DACA, and deportation. The book feels cheap because the author touches on these issues without fully exploring them, their impact, and their consequences. There's a disclosure of rape in the book that came so out of left field that it left me with whiplash. At no point do we explore how the rape has affected her and her life, rather it's just used as a way for the love interests to get closer, which is f*cking infuriating and cheapens the whole thing. A lot of the other big topics brought up, like DACA, felt predatory, like the author was trying to "name drop" to make their book seem more "diverse" without actually exploring the issues mentioned. The way the author dropped these subjects in was very similar to how she dropped in slang: like it was thrown in there to be relevant, without bothering to explain the significance or have it make sense with the rest of the story. Granted, not every time we talk about DACA or rape does it have to be an "issue book" or documentary-level information, but these tidbits stuck out as they didn't fit with the rest of the story being told. It struck me as something an inexperienced writer would do, but what concerned me is that this was left in there by the editor and publishing house. If Simon and Schuster or the editor really cared about diversity, they would have respected the issues to give them the space they needed in the book, or knew to take out things that didn't have any relevance to the story. They're thrown in like buzzwords in an attempt to profit off a "diversity trend" instead of respecting that there are real people out there with those issues, who don't want their stories used as a gimmick to prop up an otherwise exhaustingly boring book.

All in all, this book is awful. The only thing that kept me from marking it as a one-star was the fact that the author had a good grasp of craft, and the book was written well, moved swiftly, and tried to touch on some real feelings of never being alone yet always feeling alone. But everything else in the book is such a chore to endure that I can't see myself recommending it to anyone. This book really proves that characters are everything, and if your reader can't find a single thing to like about them, it's likely true for the rest of your book, too.