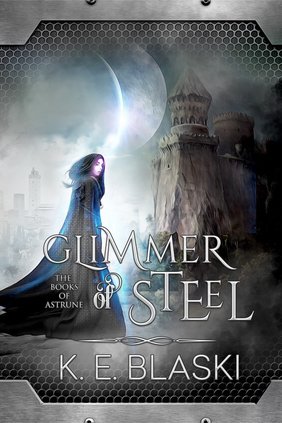 Goodreads Description: Damen has a plan to save the life of his childhood friend before she’s forced to marry the evil Noble Tortare: switch her soul with some other girl and let the other girl die in her place. Only he didn’t count on the other girl’s determination to live, he certainly didn’t count on her soul coming from a different planet—Earth, and falling in love? No, he never planned on that. Told from alternating viewpoints: Damen, a truthsayer from Astrune, and Jennica, the soul snatched from Earth.

Like Scheherazade from 1001 Nights, Jennica, the bride with the Earth girl soul, tells tantalizing stories about her planet so her beastly husband will keep her around past the wedding night. But Noble Tortare is no Arabian prince. He’s a monster from the tip of his metal tail to his penchant for sucking the souls from his wives.

Damen must be present while Jennica speaks to Noble, to verify she isn’t lying. As Noble’s faithful servant, he does what Noble asks. Only he didn’t plan to spend so much time with Jennica, and he certainly didn’t plan to care about her so deeply he can think of no one else. Now Damen needs a new plan: free Jennica from Noble’s clutches, free himself from a life of guilt for stealing Jennica’s soul, and free his heart to love—all without telling even the tiniest of lies on a world where deception is like oxygen.

If only that Earth girl wouldn’t have so many plans of her own: like keeping Noble Tortare’s soul trapped on Astrune, because after listening to her stories, Noble craves something more than Jennica’s soul—Noble wants to go to Earth.


My Review: I was given a copy of Glimmer of Steel by the author, KE Blaski, in exchange for an honest review.

A kingdom ruled by a metal monstrosity. Purple skin that turns onlookers into predators. A boy that cannot tell a lie. Once, Jennica would have brushed it all off as anecdotes of a fairy tale, until she finds her soul ripped from her body and swapped with a princess due to be eaten on her wedding night. Jennica didn’t ask for purple skin that forces her to be isolated or face the untamed lust of everyone around her, or the truth speaking Tovar boy, whose sad, kind  brown eyes make her feel something she’s afraid to admit to. Yet as time goes by it becomes hard for her to imagine her life without them. The only way to survive her stay in Astrune is to keep plying her new husband with stories of Earth. But his interest in her stories may be her undoing, for he intends to use the information to fly-- and spread his tyrannical rule all the way to Earth.

Glimmer of Steel is an incredibly fun ride from start to finish. Even though one of our protagonists, Jennica, is from Earth, we spend no time there, instead focusing on the rich fantasy world of Astrune. Though it is reminiscent of traditional ‘fairy tale’ high fantasy—king-like ruler, big castles, servants falling all over our princess-- there were so many things about it that made this world stand on its own. These world building aspects don’t just look pretty, they serve a very real purpose to the story, such as the metal that Noble fuses to his soldiers’ skin, which he uses on Jennica to punish her for running away by turning her feet to metal. These pieces come together to make Glimmer of Steel feel familiar but fresh, which is especially exciting in high fantasy. The book wastes no time on flowery description, instead getting right to the action, which is something I really appreciate. Despite the direct approach, the author definitely takes time to smell the roses, using purposeful words to get the most sensory imagery out of each sentence. Because of that, the book moves swiftly through action with all the senses evoked. I never found myself bored by description or the narration, and never was I starved for setting or a sense of the scene. The balance was beautifully done.

As for characters, holy wow. I loved Jennica. I probably fell in love with her just as Damen did, as her passion, determination, and fiery soul are so well presented on the page that it’s impossible not to. From the very first page, it`s apparent that Jennica is a character of action. Even when trapped in her room, unable to do anything to stop a pending revolt, she refuses to give up and hangs a banner out her window to get her message across. Because of this, it`s so easy to root for her, because when things go wrong for her, we know she`s going to do something about it. Too often characters can slip into a passive role and react to what`s happening to them as opposed to taking action to shape where the story leads. The only issue I had with Jennica was how easily she forgave Damen for some of the really horrible things he does to her. As well, I find it hard to understand why she would develop any feelings for Damen. I mean, his attraction to her makes perfect sense. She`s amazing! But why would she want to spend her time with someone so unapologetically awful?

Honestly, from an objective point of view, Damen is a solid character. He’s well-constructed, consistent, and has believable drives and morals. But from a personal point of view? Damen the truth-telling Tovar is the biggest ass in the book. How you do that while staying a truth teller was a little impressive, I have to admit. If he had played any role but the love interest, I probably would have loved him, but as a love interest there was no way I could get behind him. A brief (incomplete) list of his assholery: he’s the reason Jennica’s soul was snatched away (he essentially condemned her to death, knowing that he was condemning an innocent); he doesn’t apologize for it even as he starts falling in love with her, because he’s happy “she’s here with him”; he tries to poison his rival love interest and accidentally gets her instead; he tries to sabotage Jennica’s trip home because he believes she belongs in Astrune with him; I could go on. He’s also portrayed as honourable because he resists the temptation of Jennica’s purple skin, when in reality he lusts after her just as much as anyone else, and his desire for Jennica causes him to do awful things while in full control of himself, which is a lot worse than doing so while under a possessive influence. Damen has the decency to feel bad about what he does, but not enough to apologize, make amends, or change his behaviour. Because of this the romance feels a little unbelievable at best, and somewhat unhealthy at worst.

This leads into my second issue with the book. The book is framed as Damen’s world which Jennica is brought into. We see this in how the book begins with Damen and Nyima, heavily establishing their world and situation, before we even get the chance to meet Jennica. When we finally get to, we get less than a chapter’s glimpse of her world before she’s dragged into Astrune. While we don’t need to spend a lot of time in a world we already know, the rest of the story centers around Jennica’s struggles against her circumstances and her attempts to help, so it would have been nice to establish her as our primary character right off the bat. This was Jennica’s story, and by framing it as Damen’s, Jennica ended up feeling like an object being acted upon instead of an independent driving force, which is what you want your main character to be. What we’re left with felt a little jarring and especially so because I could find little to no reason to sympathize with Damen.

Aside from the above concerns, I really enjoyed this book from start to finish. The prose was simple but beautiful. The story captured me right off the bat, the tension steadily mounted, and the climax really satisfied my inner girl power. The book also explored some themes about consent as Jennica learns to stand her ground and even fight off people hypnotized by lust. The world building was my favorite part, and I loved how each aspect came around to affect the plot. Moreso, it sets itself up for an exciting sequel and leaves the reader with great lingering questions. Did they really succeed? What will happen now that the Citrons are free? And most importantly, what’s happening to Nyima back on Earth?


TL;DR: All in all, 4/5 stars. A beautifully immersive fantasy world with a fiery heroine who spins stories to save her soul.