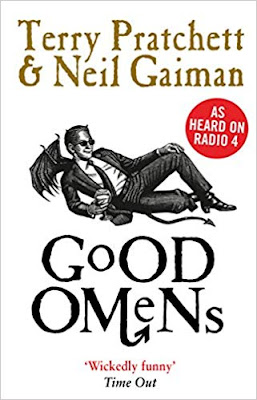 Goodreads Description: According to The Nice and Accurate Prophecies of Agnes Nutter, Witch (the world's only completely accurate book of prophecies, written in 1655, before she exploded), the world will end on a Saturday. Next Saturday, in fact. Just before dinner.

So the armies of Good and Evil are amassing, Atlantis is rising, frogs are falling, tempers are flaring. Everything appears to be going according to Divine Plan. Except a somewhat fussy angel and a fast-living demon—both of whom have lived amongst Earth's mortals since The Beginning and have grown rather fond of the lifestyle—are not actually looking forward to the coming Rapture.

And someone seems to have misplaced the Antichrist . . .

My Review: It’s the end of days, and the only ones concerned are a rogue demon and angel who appear to have more in common with each other than their respective sides. Hell has unleashed the Antichrist on Earth, but due to a mix-up between bumbling Satanic nuns, he's been lost, and the demon Crowley and angel Aziraphale only have a week to find him before Armageddon begins. With the forces of Heaven and Hell gearing up to turn Earth into a blasted battleground, Crowley and Aziraphale must find a way to stop the Apocalypse and the horrors of Revelations, or end up losing the only enjoyable thing about living—Earth.

“Hell wasn't a major reservoir of evil, any more then Heaven, in Crowley's opinion, was a fountain of goodness; they were just sides in the great cosmic chess game. Where you found the real McCoy, the real grace and the real heart-stopping evil, was right inside the human mind.”

Good Omens is a cult classic for good reason. This hilarious tale of the Apocalypse stars an angel and demon duo that set out to stop their respective bosses from destroying Earth and all its pleasures. Because it’s written by Terry Pratchett and Neil Gaiman, the book is filled with hilarious insights into good, evil, and humanity. The writing leaps off the page from the very beginning and captures the reader through its wonderfully authentic voice. It’s written in third person omniscient point of view, so the narrator (God?) can pop into each character's thoughts while never lingering long enough to give the impression that it's only one person's perspective. The book is a lot more narrative than action, so we don’t ‘see’ the events playing out as they would on screen, but rather get the tale told to us through the omniscient narrator. Pratchett and Gaiman weave an engaging story that moves at a quick pace, but doesn’t hesitate to take time to smell the roses— or sulfur.

The cast of characters really comes together to make the story what it is. Fans who have watched the show based off the book will note how diverse the casting is— women actors playing characters who were male in the book, as well as some actors of colour— however, the book sadly lacks this level of diversity. The characters are primarily described as white and most of the “ethereal” characters are described as male (God uses he pronouns, Pollution is a white man, Pepper is white, etc.). This was a bit of a disappointment, but is probably due to the era the book was written in. Sergeant Shadwell, the nutty witch finder obsessed with counting nipples, comes across much rougher in the book and spouts some racist comments that caught me by surprise. While this fits his character and is countered in book, it was still a little jarring to come across. The book also focuses more on the cast of characters as opposed to Crowley and Aziraphale, even if they do lead a lot of the plot.

Pratchett and Gaiman pulled together a hilarious tale of Armageddon that blends their strengths as writers. From Gaiman’s tendency to personify gods and myths, to Pratchett’s sharp wit and observations on life, this book brings out the best of both. Aside from the lack of diversity and some questionable racist and sexist comments from Shadwell, Good Omens is a side-splitting ride down the highway to hell. Or, at least, the M25 to the apocalypse.